Registering Domiciles in Ukraine: How the system affects Ukrainians. A sociological survey

This material is an abbreviated version of “THE DOMICILE REGISTRATION SYSTEM IN UKRAINE: Its impact on the enjoyment of the rights and vital interests of the individual. Results of a sociological study.”

This study was undertaken as part of the “Freedom of movement for everybody: reform of the residence registration system in Ukraine” which is being carried out by the ZMINA Human Rights Center with funding from the European Union.

The opinions expressed here are the authors and do not necessarily reflect the position of the CEDOS think tank, Ukrainian Center for Independent Political Research, ZMINA Human Rights Center and the European Union.

Fair use of the materials in this report is acceptable, on condition that the source is identified.

This executive summary briefly presents the results of the first all-Ukrainian study on:

Given these goal, two separate surveys were carried out: a nationwide general survey and a survey of urban residents who are not living at their registered domiciles. These polls were run consecutively over August-September 2018 by Kantar TNS in Ukraine.

The nationwide survey involved 5,400 respondents across Ukraine age 18 through 75, except for those living in occupied territories, IDPs, foreigners, stateless persons, and Ukrainian citizens who do not have a registered domicile. Data was collected August 2-22, 2018 using a stratified random sampling, with quotas for gender and age in the final step. The survey involved a personal interview at the residence of each respondent. The approximate margin of error, calculated for a random sampling of this kind, is 1.3%, not including design effect. The response rate was 32%.

The survey of urban residents aged 18-75 that are not living at their registered domicile on the free territory of Ukraine was carried out September 7-16, 2018, and did not include IDPs, Ukrainian citizens without a registered domicile, foreigners, and stateless persons. The sample set was organized to represent all the urban population that is not living at its registered domicile and to represent different types of urban areas: the capital, major cities — Dnipro, Lviv, Odesa and Kharkiv — other oblast centers, other cities that are not oblast centers, and cities that are part of the capital region around Kyiv. For each type of city, five samplings were established, each of which included 400 respondents. Altogether, 2,000 respondents were surveyed. The survey involved individual interviews following a route based on street addresses. On average, every ninth person agreed to participate in the survey.

How many Ukrainian citizens do not live at their registered domicile? 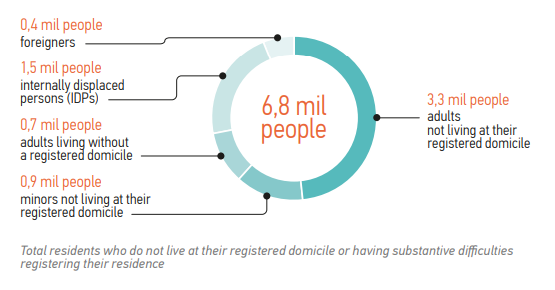 What kinds of problems are faced by those who don’t live at their registered domicile?

The reasons for this could be several:

The fact that people who are not living at their registered domiciles are able to find alternative ways to access services and exercise their rights, are unable to get access to guaranteed services or cannot exercise their rights suggest that there are social losses through the restrictions that the domicile registration system imposes. 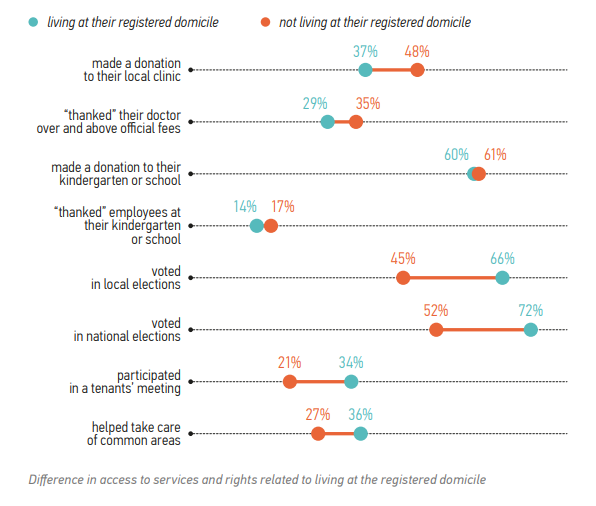 Why are people not registering their domicile?

There is a whole range of reasons why people don’t live at their registered domicile:

Thirdly, there is a general perception that being registered in a residence is connected to ownership rights. Even though registering a domicile in no way offers a way to gain rights to the property, memories of the soviet propiska system and the history of how housing was privatized in Ukraine lingers on in the imaginations of Ukrainians to this day even though registering a domicile is based on a different principle. Owners are reluctant to have people they don’t really know who are living in their residence register domicile at the property, especially renters. Fully 95% of respondents said that they would not register renters if they were to rent out their apartment. What’s more, owners are often unwilling to unregister themselves from a domicile they own in order to register the place where they actually reside. 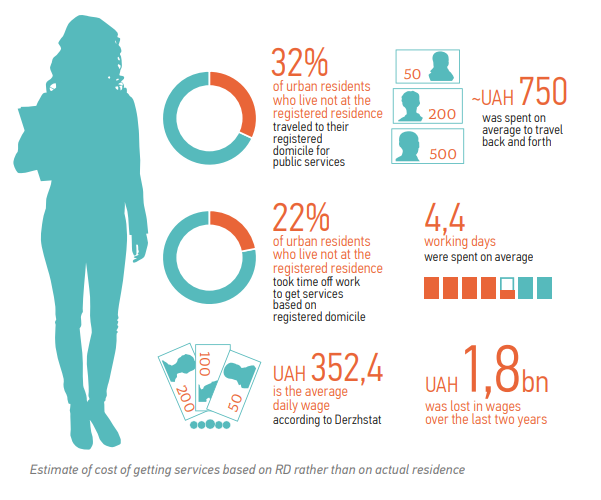 How do Ukrainians feel about having to register their domicile?

However, every second person, 49%, says the current system needs to be reformed: 26% think parts of the system need to be improved, 13% think it should be radically overhauled, while 10% think it should just be dropped altogether. Of urban residents not living at their registered domicile,

37% support the idea of reforming the system by not requiring people to prove that they have the right to register in a particular domicile. But only one in four, 25%, is prepared to actually register their domicile in order for such a system to be instituted.

In short, people often feel no need to register their domicile. They also have reasons not to de-register from a residence that belongs to them. Given this, any changes to the registration system intended to reduce the number of individuals not living at their registered domicile needs to be preceded by an appropriate public awareness campaign and include incentives. Otherwise, simplifying the procedure will not necessarily lead to more people registering their domiciles.

The mechanisms for the participation of the citizens in decision-making in Kyiv: the research results

Despite the variety of the mechanisms of residents’ involvement in urban governance, people treat public participation with mistrust and apathy. To track the effectiveness of the available involvement methods, we should regularly monitor and evaluate the implementation and use of these mechanisms.

This policy paper describes and localizes performance-based funding of higher education institutions model that could potentially replace the mechanism of state procurement.