Since 2014, Ukraine has experienced the phenomenon of forced migration. In addition to the numerous internally displaced persons, a lot of Ukrainians applied for asylum in other countries. Most applications were submitted in Russia, but many Ukrainians (34,380 people in 2014-15) asked for asylum in the EU countries. The thing is that only 13.3 percent asylum seekers from Ukraine received a positive response. About a half of the submitted applications are still undergoing consideration. However, among the applications which have already been processed, 70 percent were denied asylum.

In which countries do Ukrainians seek asylum? Which social categories contributed to the increase in the number of asylum seekers from Ukraine in the EU? Why are Ukrainians denied asylum? And who among Ukrainians potentially has the right to a refugee status or other kinds of protection?

Since the early 2013, the number of Ukrainians who apply for asylum in the EU countries has increased significantly. In 2013, before the protests in Kyiv started to escalate and before the events in Crimea and in the East, Ukraine was not even one of the top 30 countries of origin of asylum seekers (with the average of 70 applications per month in 2013). Since January 2014, the number of asylum seekers from Ukraine has been gradually increasing. Since it peaked in October 2014 (2,170 applications during the month), their number has stayed at around 1,700-2,000 applications per month. There was a decrease only in December 2014 and January 2015 (1,440 and 1,345 applications respectively), which is apparently related to the holiday season in Ukraine. The data about the killed and the wounded in the East of Ukraine do not demonstrate any similar decrease in the same period.

In which countries do Ukrainians seek asylum?

If in 2008-13 Ukrainian asylum seekers mostly applied to Sweden, Czech Republic and France, since 2014, the top countries are Italy, Germany, and Spain. In addition, Poland also appears on the list.

Top 5 countries where Ukrainians applied for asylum in 2014-15 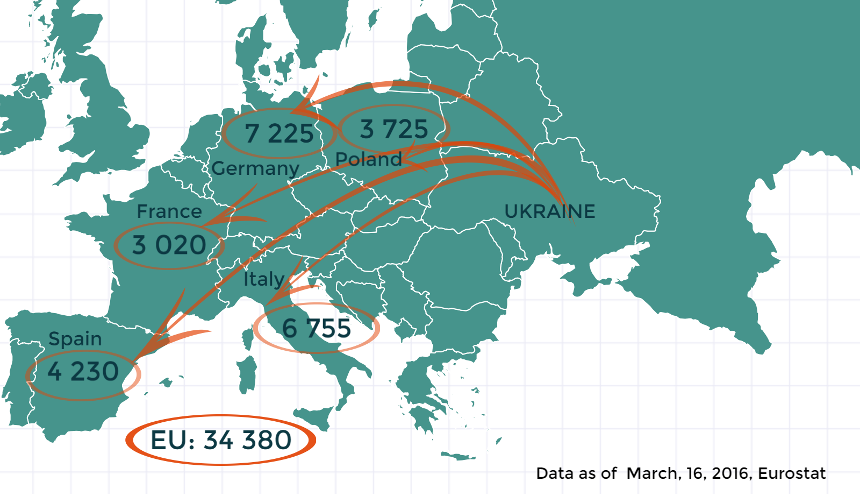 Why these countries? According to 2011 census data, these countries have the most residents who were born in Ukraine: 233,000 in Poland, 206,000 in Germany, 181,000 in Italy and 74,000 in Spain. In addition, according to the International Organization for Migration, the biggest fraction of all long-term migrants from Ukraine in the EU live in Poland (22.5 percent) and Italy (15.7 percent). On the other hand, Czech Republic, where a relatively high number of Ukrainians (138,000) live, has received not much more applications for asylum in 2014-15, than the more remote and poorer (based on the level of GDP) Portugal (33,000 Ukrainians). In 2015, 370 applications were submitted in Portugal, and 565 in Czech Republic.

Forms of protection in the EU countries

There are at least two forms of protection that can be obtained in the EU countries, the refugee status and the "subsidiary protection."

According to the 1951 Geneva Convention, the refugee status is a form of protection provided to any person who, because of their "well-founded fear of being persecuted for reasons of race, religion, nationality, membership of a particular social group or political opinion, is outside the country of his nationality and is unable or, owing to such fear, is unwilling to avail himself of the protection of that country."

"Subsidiary protection" is provided to those who need protection but do not qualify as refugees according to the Geneva Convention. Such protection is provided to the people who applied for asylum because of the "threat to live, security or freedom in the country of origin because of the fear of death penalty or the execution of a death sentence, inhumane or degrading treatment or punishment or prevailing violence in the situations of international or internal armed conflict or systematic human rights violations."

Any kind of protection can be cancelled, if it is suspected that the live and well-being of the particular person is no longer threatened in their home country. Usually this is signified by regular travel to the home country.

Why are Ukrainians denied asylum?

The available data do not allow for the analysis of the reasons which Ukrainians indicate in their applications. However, it is obvious that the majority of the applications do not provide the sufficient and necessary reasons for obtaining the refugee status or "subsidiary protection." The evidence for it is than so many Ukrainian applicants are denied asylum. The consideration of an application can proceed for up to a year; and, in case of denial, an appeal can be filed, which is also considered for about a year. Every application is considered separately. The procedure involves a face-to-face interview with the seeker, in which he or she must provide arguments and proof of the reason why she or he cannot stay in their home country. The appeal is processed by a different institution, and it involves a complete review of the case. During the whole period of waiting for the decision — up to two years — the asylum seekers have the right to social housing, food and minimal financial support. And even though the seekers must leave the country in case their appeals are rejected, they can apply for extension of their stay.

The most prevalent reason for denying asylum was the "internal flight alternative", that is, the possibility to move to a different part of their home country and feel safe there.

Only 1.8 percent (390 decisions) of Ukrainians received the status of refugee according to Geneva Convention. The majority of such decisions were made in France (150 decisions). Another 1,150 asylum seekers received humanitarian status. The rest were given other forms of protection.

The fraction of positive decisions about appeals is very small. Among 1,680 appeals which were processed, only 40 were satisfied. It is probable that a considerable fraction of Ukrainians use the appeals for the sole purpose of extending their right of legal stay.

A considerable part of the applications and appeals (2,110) were withdrawn by the seekers themselves. Most of such cases were in Poland (870 applications). There are at least two possible reasons why the seekers withdrew their applications. First, they could have found simpler ways to legalize their residence and work in Poland. Second, the applicants could have decided to apply in another country with higher living standards and better social support. According to the international regulations, the person who applied for refugee status has to wait for the decision in the country where he or she submitted the application. The decision to return to Ukraine as one of the reasons for withdrawing an application must also not be ignored.

There is an opinion that the increase in the number of asylum seekers from Ukraine is most probably the evidence for new means of legalizing labor migration. That is, that labor migrants, rather than those whose lives are threatened and whose rights are violated, would sooner travel abroad.

According to the procedure, asylum seekers have no right to work while their application is being considered. The right to work will be given only to those who succeed in obtaining "the status of refugee" or "subsidiary protection." Other seekers, who will be given "humanitarian status" or "temporary protection," can receive the right to work, if it is permitted by the laws of the country where they obtained the status. The problem is that, because the institutions which deal with refugees are overloaded, the process of considering applications takes too long. That is why some countries decide to provide working permits to everyone who waits longer than the established term. For example, in Germany, all the applicants receive working permits three months after they applied for asylum, and in Italy, after six months.

The indirect evidence of the motives of asylum seekers can be provided by general demographic data.

It is known that labor migrants usually do not move abroad as families. However, according to the Eurostat data, a fourth of all the asylum seekers from Ukraine are children under the age of 18 (5,050 people).

The regional origin of Ukrainian asylum seekers in the EU can be indirectly deduced from the – Google Trends data (the tool for analysing Google search requests). In Ukraine, the request "obtain refugee status" (in Russian) was trending in early 2014. It was most popular in Donetsk and Kyiv. The significance of this number can be evaluated in comparison to the number of the same requests in Moscow, which was 5 times less, than in Donetsk. The majority of such requests probably were about obtaining refugee status in Russia, because the number of applications for asylum in Russian Federation in 2014-15 was 13 times higher than in the EU — 409,243 applications.

The information about reasons provided by asylum seekers in their applications is not public and probably cannot be easily categorized. We do not have access to these data and, therefore, cannot know for sure why Ukrainians are denied asylum. The reason why a considerable part of applications are still being processed (and in some countries Ukrainians' cases are frozen) is the serious overload of the relevant institutions because of the migrant crisis in the EU. Apparently, a considerable number of applications by Ukrainians simply do not provide sufficient reasons for obtaining any kind of protection.

Apparently, a considerable number of applications by Ukrainians simply do not provide sufficient reasons for obtaining any kind of protection.

In particular, it is indicated by 70 percent of denials. For those who flee the occupied territories because of the armed conflict and the deterioration of living conditions, the "internal flight alternative" is a serious argument against providing any kind of protection outside Ukraine. Asylum can be provided only to those who have personal fears about the impossibility of staying on Ukrainian territory as a result of persecution, threat to their lives and well-being. However, a certain fraction of those who applied for asylum in the last two years, apparently, used it simply as a means to migrate to the EU countries.

In 2019, the think tank CEDOS conducted an integrated study on the housing policy in Ukraine. We analyzed the researches on housing policy in different countries, the changes in Ukrainian law during the years of independence, the data from the state statistics, and the effectiveness of government housing programs.

The challenges of state financing of higher education.

On March, 18th this year, an agreement between the European Union and Turkey was signed. It activated the process of readmission, and, Brussels hopes, should resolve humanitarian migration crisis in Greece.