Ukrainian Students Abroad: Data for the Academic Year of 2017/18

We have completed our annual data collection on the number of Ukrainian citizens studying abroad and are ready to share the results.

First of all, we are going to talk about the change in methods of data collection from three countries: Russia, Romania and Belgium.

From this year on, we will include the data about Ukrainian citizens studying in Russian higher education institutions under state financing, which was significantly allocated by the Government of the Russian Federation to persons with Ukrainian citizenship after the aggression against Ukraine. The corresponding recalculation of the data was made not only for the last year but also for the previous ones. Previously, we didn't include state-financed students. We still don’t take into account data from Russia about Ukrainian citizens studying in occupied Crimea and Sevastopol, though.

Data from Belgium have been retrospectively updated and now presented separately for Flanders and Wallonia.

Over the years of the project’s existence, there was created a database that covers 38 countries, primarily Europe and North America, from 2008/2009 to 2017/2018 academic years. We are in touch with the government agency in charge of collecting and processing statistics on foreign students in each of these countries. The agencies, listed at the end, have given us official data and metadata, or definitions, that help us to compare statistics from different countries.

In most countries, this number covers Ukrainian citizens studying in higher education institutions recognized by these countries. We have considered graduates, daytime students, bachelors and masters.

Specific comments about France. The number of Ukrainian citizens is given without the students attending the so-called grandes écoles since they usually focus on narrow subjects, have tuition fees and are considered more prestigious. Only 18% of all the students in France enroll there.

Specific comments about the Netherlands. The number of Ukrainian citizens is given without the students of universities of applied sciences. This number applies only to research universities.

Specific comments about Romania and Bulgaria. Romania has changed the way foreign students are accounted for in their universities. They are defined not by citizenship but the country where they received secondary education. Earlier, we had a number of students with Ukrainian citizenship studying at Romanian universities. Now, starting from the 2014/2015 academic year, we take into account those who completed secondary schooling in Ukraine and currently study at Romanian universities. Note that this is the way Bulgaria accounts for foreign students.

We will further explain why during the 2018/2019 academic year, we are providing data for the 2016/2017 academic year. It’s because the statistical data collection in different countries takes different amounts of time. In most countries, it takes about one year, whereas other countries provide access to the requested data after 1.5-2 years. Therefore, as of December 2018, the most recent available data is for 2017/2018 in most countries. However, there are some of them where the most recent available data is for 2016/2017. These countries include the United Kingdom, Belgium (Wallonia), Spain, Canada, Slovenia, France, Sweden. There are also countries, such as Greece, where access to data is restricted due to political or economic reasons. That is why the data collection takes longer. To compensate for this, we make a forecast for 2017/2018, which you can find below. Besides, in addition to this data, we provide the available data, including for 2017/2018.

Let's move on to the data itself. In the 2016/2017 academic year, 77,424 Ukrainian citizens studied at foreign universities. The Ukrainian HEIs (universities, academies and institutes of all forms of ownership) have about 900,000 Ukrainian full-time students. 8% of them made up those studying abroad. They tend to enroll in Poland, Russia, Germany, Canada, Czech Republic, Italy, the USA, Spain, Austria, France, Slovakia. These countries receive more than 90% of all Ukrainians studying abroad. In total, the number has more than tripled in the last nine years – from 24 104 to 77 424 students. Poland, Russia, Czech Republic, Slovakia, Austria, Italy, Spain, Canada and Bulgaria provided the largest increase. 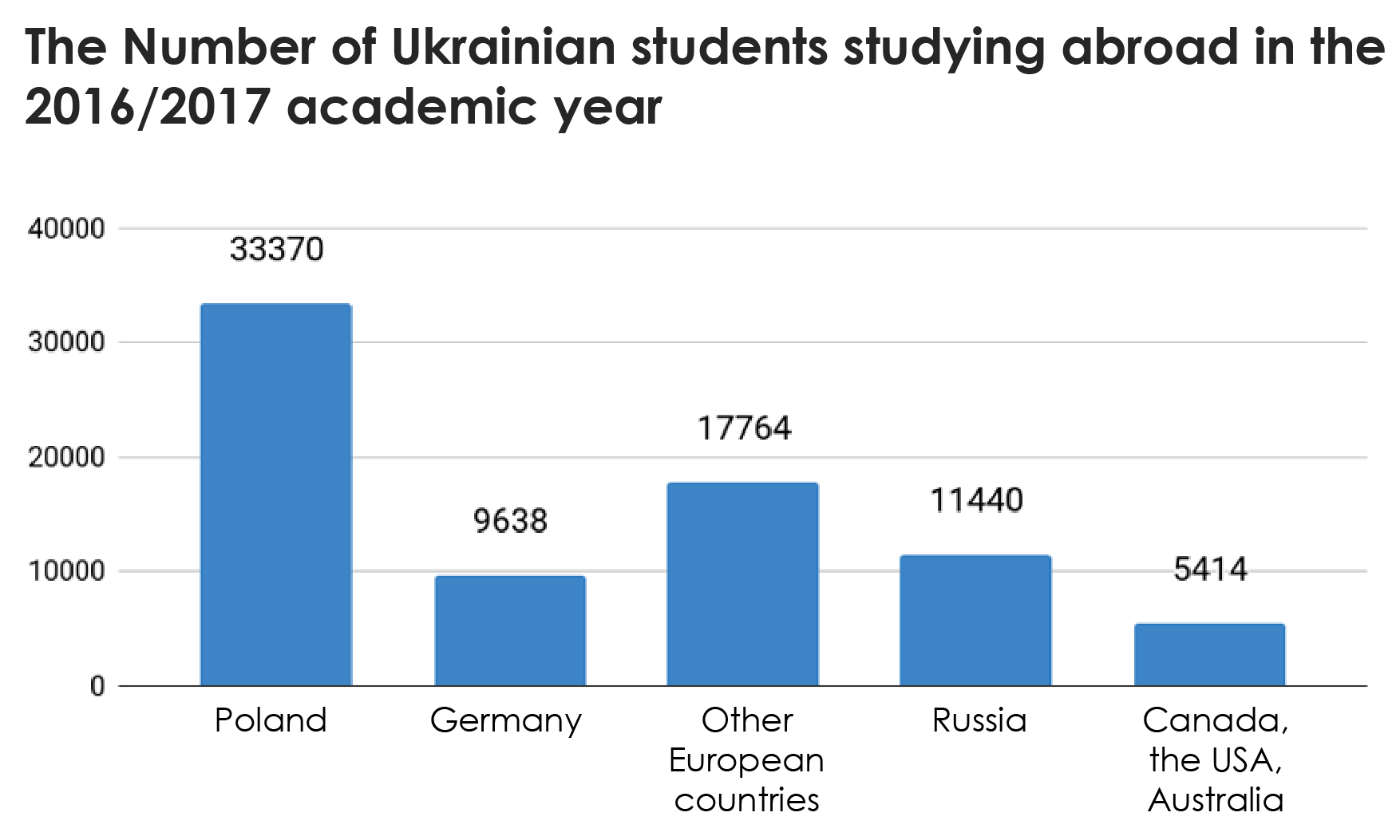 Given the data for 2017/2018 from 29 countries and assuming that the numbers won’t decrease in other countries, we predict that the final number of Ukrainian and foreign students in foreign universities in 2017/2018 will turn out to be at least 83,000 people. Providing that the Ukrainian HEIs (universities, academies and institutes of all forms of ownership) had about 890,000 Ukrainian citizens enrolled in full-time programs, about 8.5% of them studied abroad.

Who considers the Ukrainians strategically important?

Meanwhile, Ukrainian students are strategically important to Poland. They comprise 55% of all foreign students. Given that most of them pay out of pocket for both education and housing, they are important investments for Poland. Ukrainian students compensate for the demographic decline and the departure of the Polish youth to higher education institutions in other EU countries. Polish HEIs will continue to actively recruit in Ukraine to retain or even increase the number of students.

We can see a similar situation in Slovakia, where the Ukrainian students made up 30% in the 2018/2019 academic year. The only difference is that almost all of them study at the expense of the Slovak budget, which means that they bring budgetary funds to Slovak universities but often pay for their accommodation out of pocket just like the Slovaks. We assume that Slovak universities will also expand their recruitment in Ukraine.

The rapid increase in the number of Ukrainian students also makes them important for Bulgarian universities, especially for undergraduate programs, where students with a Ukrainian secondary school diploma make up almost 20% of those who have completed secondary education outside Bulgaria.

Russia doesn’t have any tangible benefits from the expenses of the Ukrainian students. However, they play a significant role in terms of politics for the Russian Federation. Russian pro-Kremlin media are always trying to exaggerate the number of Ukrainian citizens. They even distort their official state statistics. We observe another benefit in terms of politics Russia has dramatically increased state financing for Ukrainian students because after the attack on Ukraine. In 2014/2015, over 3,000 students were given state financing, although a little more than 300 people were recruited a year earlier. However, these quotas didn’t last long because, in 2017/2018, less than 500 Ukrainian citizens were recruited.

How to interpret this data?

Any generalized interpretation of the number of Ukrainian students in foreign universities is risky. We recommend refraining from this. Each country has its vision about the access of foreign students to higher education, their integration and other policies. That is why it’s impossible to use a one-size-fits-all approach.

Even the students have different motivations within a certain country. We offer to use a little simplified hypothesis: the more challenging it is to enroll in a foreign HEI, the higher is the competition, the greater the intellectual effort must be made – the easier it will be to understand the departure of a person to study abroad since the quality of higher education is higher. Currently, our special research of each of the above-listed countries shows that young people who have gone to study abroad are no longer satisfied with the living conditions in Ukraine. In particular, with the quality of higher education. They consider higher education in another country a bridge to a better future after graduation outside Ukraine.

However, not always our desires and intentions become reality. Not all Ukrainian students keep living abroad, even if it was their original plan.

Will improvements in the Ukrainian higher education system keep these people from going abroad? – Yes, but not directly. They will work indirectly and only provided other changes in the living standards in Ukraine.

Will the abolition of EIT or any other simplification in the entrance process to the Ukrainian universities keep these people from going abroad? – No. EIT is not the reason why Ukrainian students opt for foreign universities.

Will the outflow of these people abroad increase as a result of higher tuition fees in Ukrainian universities? – Yes, it will affect the outflow at some point. Especially, if the tuition fees increase will not be accompanied by the increase in the quality of higher education and better prospects for the Ukrainian students after graduation.

The list of institutions that provided us with information

Recovery of hromadas: what and how to plan
event
Employment, social protection, housing: The population’s attitude towards government programs of socioeconomic support and the need for them
research
Communication, informing, and transparency: how to create a basis for participation
event