How to Measure Integration of Internally Displaced Persons

It is impossible to evaluate the integration process of IDPs without proper implementation of the process through periodic and reliable data on IDPs. To achieve this, we should conduct the census and include there a question that would allow us to distinguish IDPs among other internal migrants who have changed their place of residence.

The analysis was carried out by the think tank CEDOS within the framework of the “Think Tank Development Initiative for Ukraine”, which is conducted by the International Renaissance Foundation in partnership with the Open Society Initiative for Europe (OSIFE) and with the financial support of the Swedish Embassy in Ukraine. 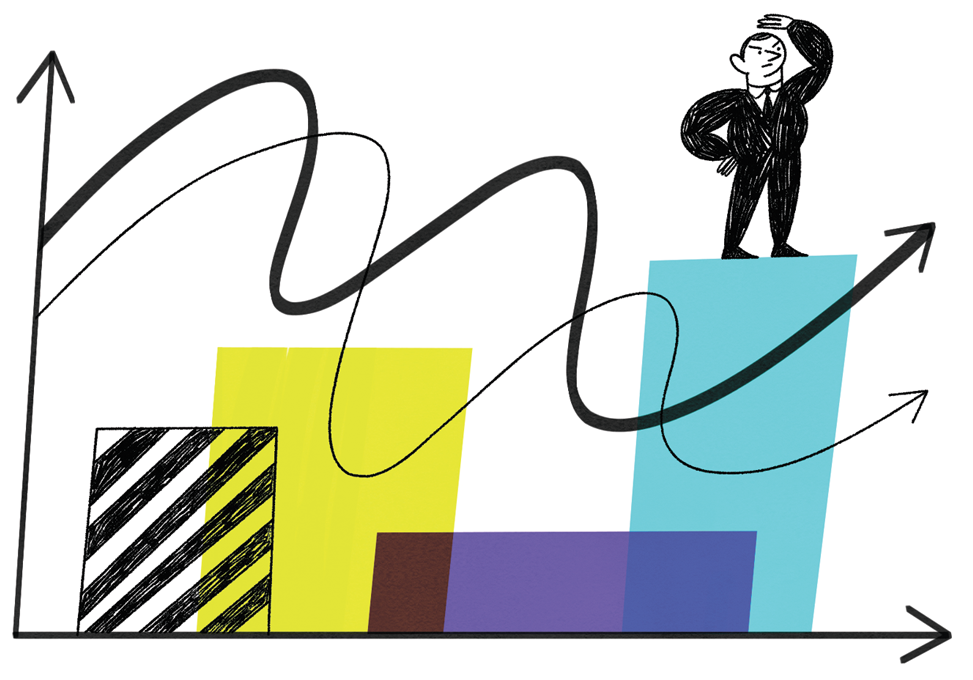 Should we bring up the integration of IDPs six years after the beginning of displacement?

According to the international research about the foreigners moving to another country, it takes about 5-10 years to integrate into a new place (in some cases, migration also affects the life of second-generation migrants). The sources usually consider the absence of human capital a barrier to integration. It includes language knowledge, work experience in the target country and understanding of the cultural traditions and rules of conduct.

However, the results of the research have a rather limited capacity for application in terms of IDP in Ukraine. On the one hand, internally displaced persons haven’t crossed the country’s borders and often moved relatively short distances from their previous place of residence. On the other hand, their relocation has never been voluntary (compared to migrants moving to other countries mainly for employment purposes) and the relocation experience itself has often been traumatic.

The main source of data allowing us to make conclusions about the integration of IDPs is the data from the National Monitoring of the Displaced Persons Situation (hereinafter NMS). It was implemented by the International Organization for Migration in Ukraine since 2016 with the financial support of international donors.

According to the latest round of NMS, 51% of the IDP respondents said that they had integrated into the local community and 40% said to be partially integrated. Together, 91% of IDPs have been interviewed. Compared to previous rounds, 80% indicated a certain level of integration in 2018 and 92% in 2017. On one side, a significant part of IDPs feel integrated in terms of objective assessment. On the other side, the dynamics of this indicator needs reviewing (responses may have been influenced by certain events of 2018 or changes in the survey methods).

One of the more objective indicators of IDPs' well-being is the average income per household member. When comparing the average income of IDPs, based on NMS data, and the corresponding indicator for the whole population, based on the data of the State Statistics Committee, we can see that there is a significant income gap: sometimes the average IDP income is half the income of the whole population. This gap tends to increase, thereby contradicting the convergence hypothesis. 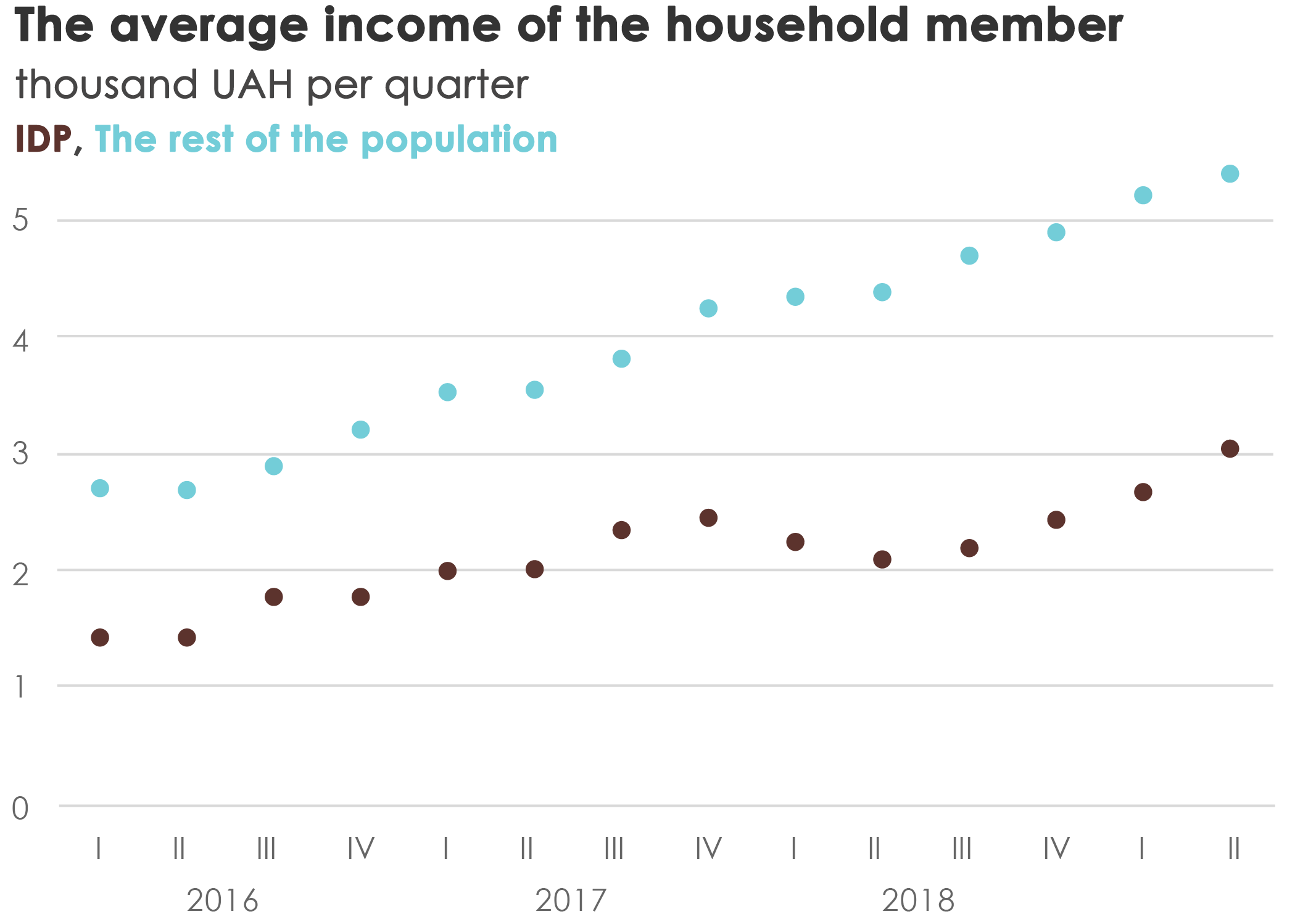 Source: The data of the National Monitoring System of the Situation of Internally Displaced Persons, Statistical Bulletins “Expenditures and Resources of Ukrainian Households”, author's calculations

The need to investigate integration issues is also caused by the high proportion of IDPs who report problems with access to housing and employment from round to round.

There is no consensus in the academic literature of migration studies to define integration. The empirical research of the field is based on available data and the need to evaluate the integration process to develop effective policies. Most studies measure the integration of migrants who have moved to another country for employment or family reunion. The studies of the integration process of forced migrants (seeking international protection) have recently appeared. Many forced migrants have come from the Middle East and Africa into the EU since 2015. However, the integration of IDPs, who have changed their place of living within a single country, is still poorly researched. It’s because internal displacements predominantly occurred in countries with weak governments and low capacity to develop data-driven and fact-based policies.

Based on the analysis of the research dedicated to the integration of other groups of migrants, we can distinguish two approaches to measuring the IDP integration.

The first approach is about defining the criteria for successful integration by the policymakers. Integration is considered successful when long-term decisions are made to integrate IDPs.

Based on international practice, such decisions include the integration of IDPs into host communities or reintegration at the previous place of residence.

We consider only relevant criteria relating to integration into host communities since the reintegration measuring process requires other approaches. To define the criteria for achieving long-term solutions for IDPs, it is recommended to use the Framework Program of the Inter-Agency Standing Committee on Finding Long-Term Solutions to Benefit Internally Displaced Persons.

This program defines the criteria for long-term decisions in areas such as protection and security, living conditions, access to livelihoods, resolving housing issues, land and property, documentation access, participation in public life. This approach analyzes the law on the absence of barriers to IDPs while accessing social services and the existence of cross-sector legislative barriers.

Another approach to measuring integration is comparing migrants with the local population or forced migrants with migrants who have voluntarily changed a place of residence.

Based on the potentially available data, we should compare internally displaced persons with residents in host communities. Another reference group could also be recent internal migrants (who have voluntarily moved within the country for employment). However, it is still a poorly-researched population group. So the data is currently limited.

According to this approach, the integration process is completed when the IDPs have the same rights as the local population. The differences in socio-economic characteristics (such as a higher proportion of children and pensioners among IDPs) are taken into account.

Potential sources of data in Ukraine

The census, that must be conducted every 10 years according to the recommendations of EU, could be another source of data for evaluating IDP integration, namely for evaluation of the long-term effects of displacement. The census contains questions concerning the labor market and living conditions of the population and allows to compare the rights of IDPs to the rights of persons permanently residing in the country and the rights of those who have recently changed the previous place of residence. Besides, the census is the only available source of data on the general number of internally displaced persons. The census can help to collect information on the sex and age composition of IDPs and placement of IDPs in Ukraine (this information is not available in the Unified Information Database on Internally Displaced Persons, which belongs to the Ministry of Social Policy).

Whether a respondent was forced to leave his/her place of residence as a result or to avoid the negative effects of the armed conflict on a temporarily occupied territory was stated in the trial census program approved in August 2018 by the State Statistics Service. The answer to this question could give the data on all IDPs. This very issue wasn’t included in the census documentation in November 2019, right before the census (on 1-26 December 2019) due to the remarks of the Commissioner for Human Rights of the Verkhovna Rada of Ukraine.

However, it is not enough to include questions about the forced displacement from temporarily occupied territories of Ukraine to obtain IDP data. IDPs make up a relatively small part of the population and the obtained estimates are not likely to be reliable. To obtain reliable indicators, we should use additional IDP samples.  To build these samples, we need the information on IDPs. The only way to do that is through the census.

Based on the Household Living Survey data, we can evaluate the following indicators:

To evaluate the integration process of IDPs, we should set the integration criteria (long-term displacement decisions) and enshrine them in the Integration Strategy of IDPs for 2020, on the one hand.

On the other hand, it is impossible to evaluate the integration process of IDPs without proper implementation of the process through periodic and reliable data on IDPs. To achieve this, we should conduct the census and include there a question that would allow us to distinguish IDPs among other internal migrants who have changed their place of residence. Based on the data about the general number of IDPs, we should develop the methods to evaluate the key indicators for IDPs regarding labor market conditions, living conditions, financial situation and health according to the random surveys of the State Statistics Service.

Recovery of hromadas: what and how to plan
event
Employment, social protection, housing: The population’s attitude towards government programs of socioeconomic support and the need for them
research
Communication, informing, and transparency: how to create a basis for participation
event