In 2018, we implemented 14 projects, received more than 1.5 million responses to our social media publications, and were mentioned in traditional media 1,300 times. We studied a lot of literature and data. We organized, on our own or in cooperation with our partners, 23 events in 8 cities of 4 countries.

Internally, we also got stronger as an organization. We changed our CEO, reorganized our managing bodies, developed and have been implementing several new organizational documents. We also strategized and recorded sevel key strategic areas of our activities.

We’re doing all that in order to realize our values: social justice and evidence-based policy. 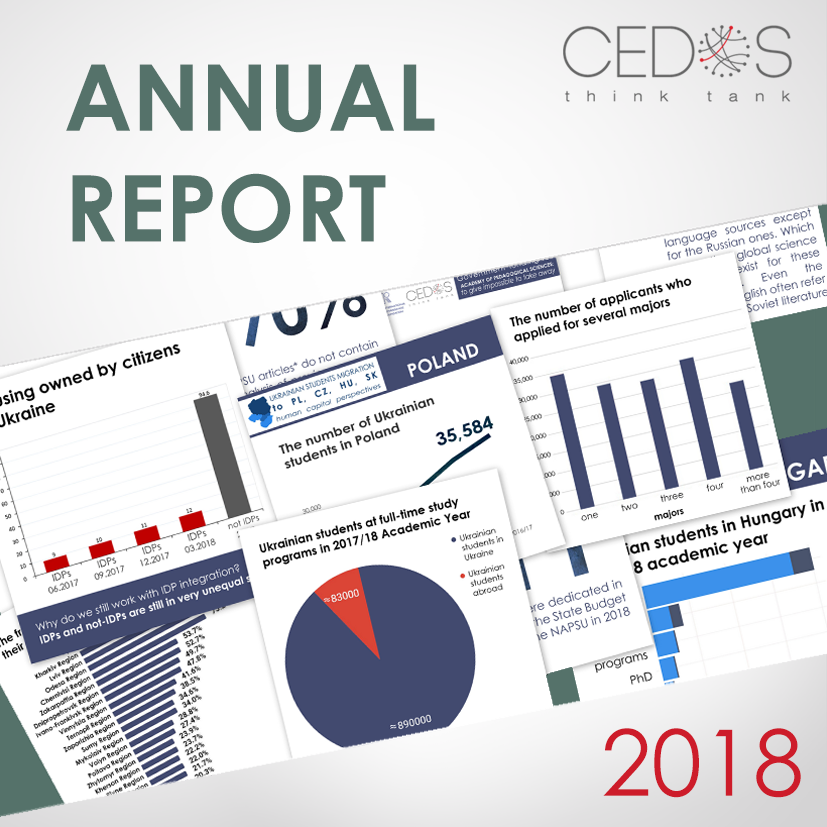 In this report, we explain what we do in our newly articulated strategic areas of activity. We also share the results of the projects which seem the most important to us for fulfilling our values. At the end of the report, we list the projects that were not part of any of the areas. Also at the end, we report about our financial income and spending in 2018. We do not cover any unfinished projects in this report.

Institutionally, in 2018, we were supported by the Open Society Initiative for Europe (OSIFE) and the Think Tanks Development Initiative for Ukraine, implemented by the International Renaissance Foundation in partnership with the OSIFE and with financial support from the Embassy of Sweden in Ukraine.

Every year, we collect data about the number of Ukrainian students studying abroad, and research the differences between their intentions and the policies in Ukraine and in the receiving countries, in order to improve the conditions for the development of the human capital of Ukrainian students.

In this project, we researched:

Based on these studies, we found out where the policies in the receiving countries contradict the students’ expectations and developed recommendations about how the policies should be changed in order to develop the human capital of Ukrainian students abroad.

Click on the image to read the materials about the relevant countries (available in English). 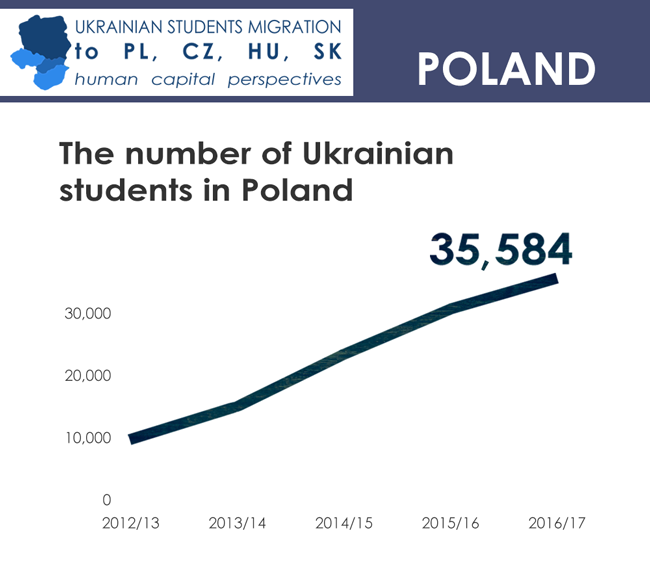 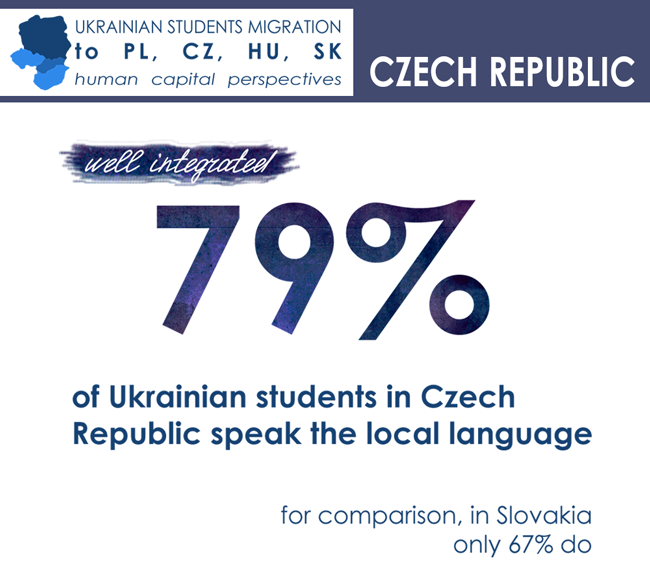 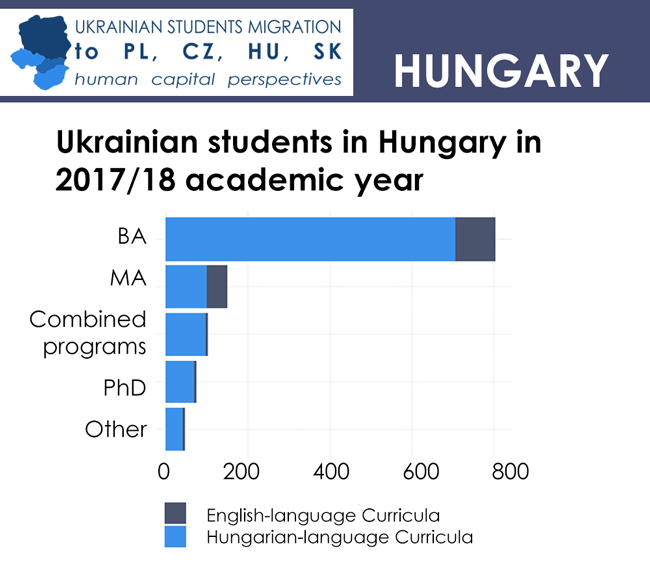 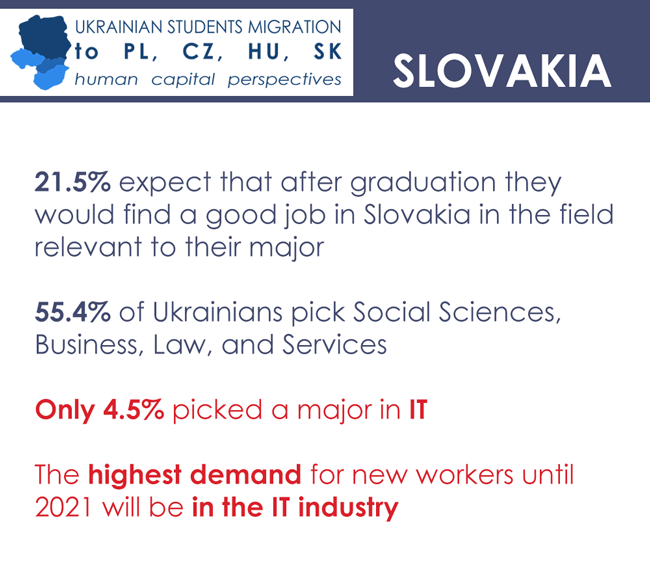 The key result is the debunking of the stereotypes about these issues that are widespread in Ukraine. In particular, we state that there is no mass brain drain at the student level. The majority do not leave the country for good education, they leave to escape poor living standards. This, however, does not mean that other student don’t exist.

The project was implemented with the support from the International Visegrad Foundation and the Kingdom of the Netherlands in cooperation with the Civil Affairs Institute in Poland, the Central European University in Hungary, the Association for International Relations in the Czech Republic, and the Slovak Foreign Policy Association.

We demonstrated which countries are the most popular among Ukrainian students who move abroad to study. We showed the increase in the number of such people in the past 10 years, and revealed the countries for which our students are strategically important. We also debunked the stereotypes that the External Independent Evaluation or the reduction in state-funded study places promote the student migration. 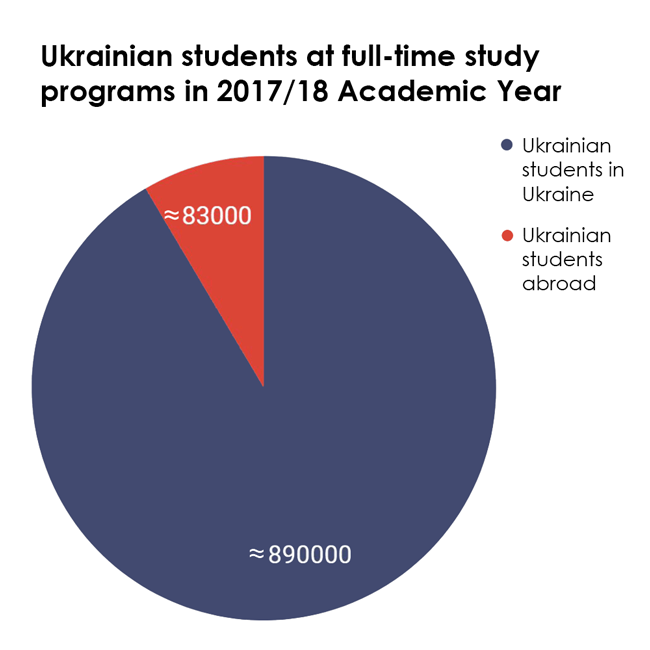 The results of the empirical analysis which we offer curb the spreading of false statements regarding the emigration of Ukrainian students. Read the paper (in Ukrainian).

Area: Development of the Urban Movement

We strengthen the capacities and competence of the urban movement in Ukraine and create the opportunities for networking between urban initiatives, activists and practitioners for the purpose of popularizing the values of the fair city.

Only 40 percent of the Forum’s visitors were from Kyiv (40 percent were from other regional centers, and 20 percent were from smaller cities). We managed to ensure equal representation of different areas and formats of activity, and secured positive feedback. So the word “urban” in the Ukrainian discourse is now associated with the issues of justice, research and data, not just with landscaping or stylish buildings.

The Forum was organized with support from the Charles Stewart Mott Foundation, the Heinrich Boll Foundation’s Ukrainian Office, and 350.org. Visit the Forum’s Facebook page.

We have published 4 special projects: The Political Economy of the City, Urban Initiatives of Odesa, Gamification, and Can – Act! Throughout the year, we maintained the Urban Events Announcement Board, which published 563 announcements, of which 46 (8 percent) were posted by the users. The Database of Initiatives was edited by users only 6 times. In 2018, the website got a new category, the Catalogue of Urban Studies, which lists 164 links. 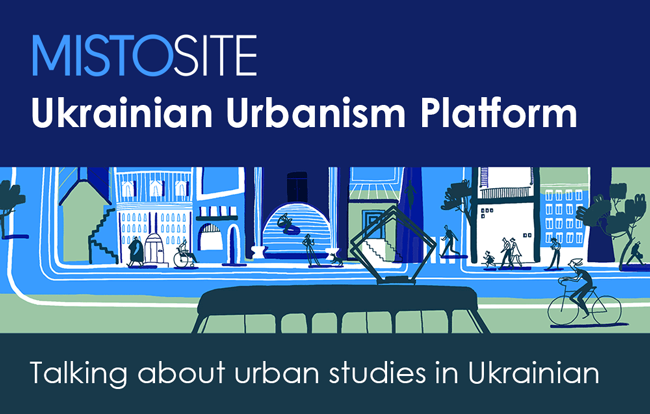 This year, for the first time in its history, the search traffic was higher than social media traffic. We opened our Telegram channel (170 subscribers) and the Facebook group Urbanism UA (1,000 participants). In addition, we continue to develop our mailing list.

The development of this media is part of the Strengthening Civil Participation in Ukrainian Cities project, supported by the Charles Stewart Mott Foundation.

We assess the IDPs’ access to social services, housing and labor market, in order to evaluate the effectiveness of IDP integration policies and develop recommendations about improving their effectiveness. 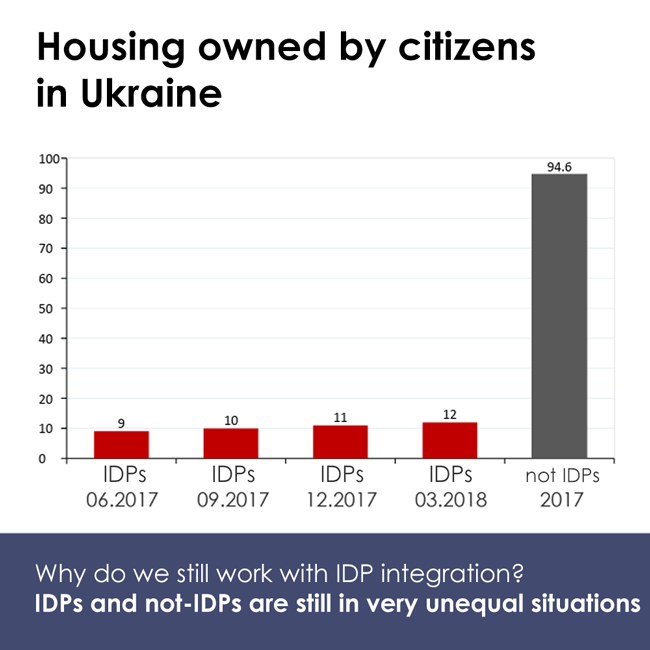 This first step allowed us to plan and launch, already in 2019, the next project in the field of IDP integration. Read the index (available in English).

The Index of IDP Integration: Measuring Progress in Cohabitation and Integration project was supported by the Black Sea Trust for Regional Cooperation.

We analyse the results of admissions campaigns and provide the Ministry of Education and Science with recommendations on how to improve the conditions of admission to higher education institutions. We also organize workshops for applicants and their parents on the rational approach to choosing universities and majors.

The Movement of Applicants between Ukrainian Regions: Comparison of 2017 and 2018

We showed where applicants move from and to when they apply to universities. Which regions lose the most applicants and which, on the contrary, gain applicants in general and applicants with high EIE grades in particular. The analysis revealed the far reach of the “magnets” of Kyiv, Kharkiv and Lviv. We also showed which majors have the highest concentration of applicants in Kyiv HEIs. 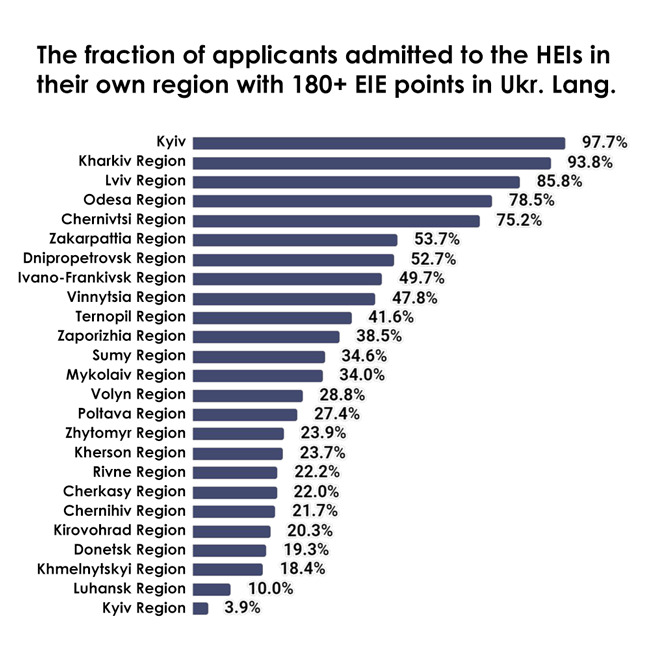 The results of the empirical analysis which we offer curb the spread of false statements about the internal migration of applicants. The results are used by the Ministry of Education and the Education Committee of the Verkhovna Rada in their rhetoric. Read the material (in Ukrainian).

Combinations of Majors and Competition between Majors during the Admissions Campaign

We demonstrated how higher education institutions can improve the effectiveness of their informing of prospective applicants. To do that, we found which majors are combined by applicants when they apply to universities and colleges during the admissions campaign. 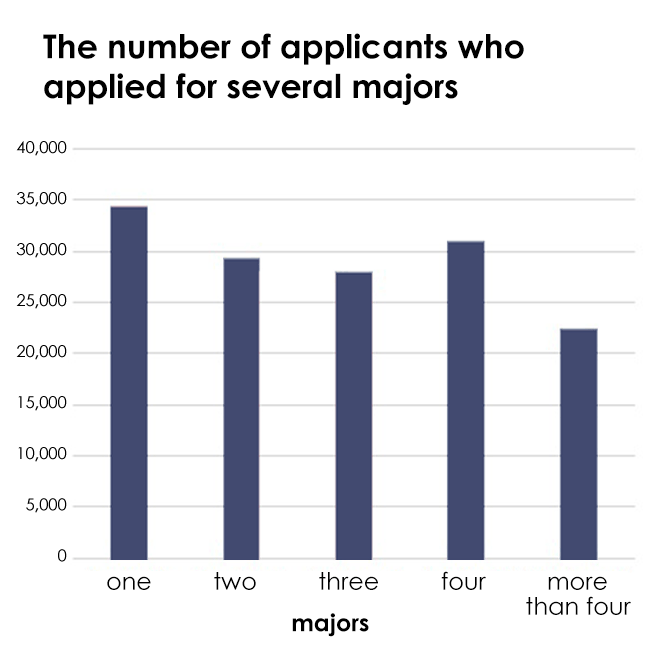 We debunked the stereotype of supposedly disoriented applicants and showed their most popular and least popular combinations of majors during the admissions campaign. Read the material (in Ukrainian).

Education in the Hands of Communities in Ukraine: What Has Changed So Far?

In September we presented our analysis of decentralization reform's influence onto the access to the high quality education to civil society leaders and educational establishment in Berlin. Until recently, Ukraine’s education was managed by state administrators who were far from local communities. With the power to manage education together with the ability to allocate funds now transferred to communities, these communities have the opportunity to address their needs at the local level. 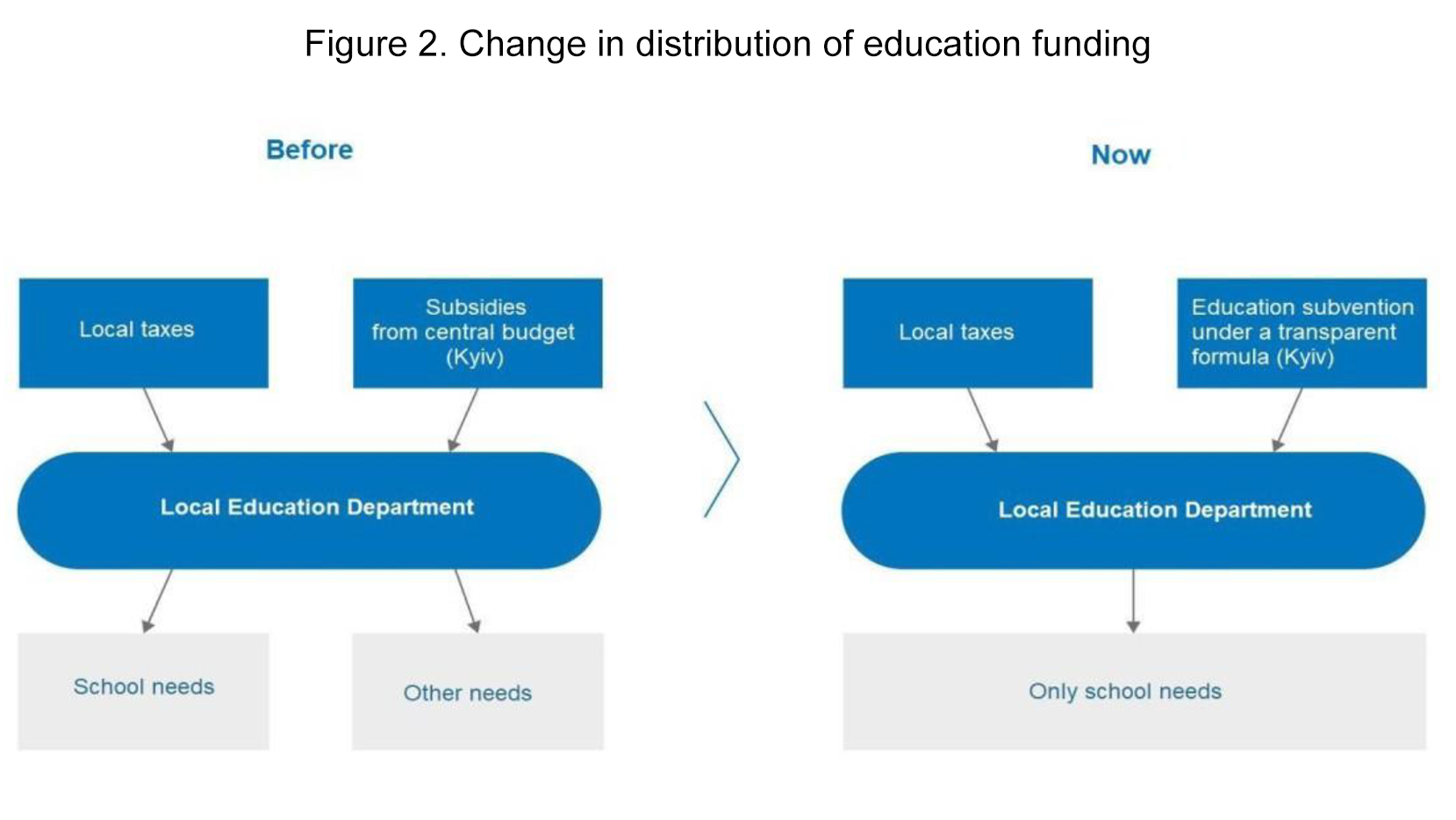 This report was produced under the Ukrainian Think Tank Development Initiative (TTDI), which is implemented by the International Renaissance Foundation (IRF) in partnership with the Open Society Initiative for Europe (OSIFE). TTDI is funded by the Embassy of Sweden in Ukraine. Read the report (available in English).

We analyze whether urban infrastructure, managerial approaches, decision making systems and systems of resource distribution, as well as city programs and development strategies can meet the needs of various social groups; we provide recommendations on how to make city administration more effective and fair. 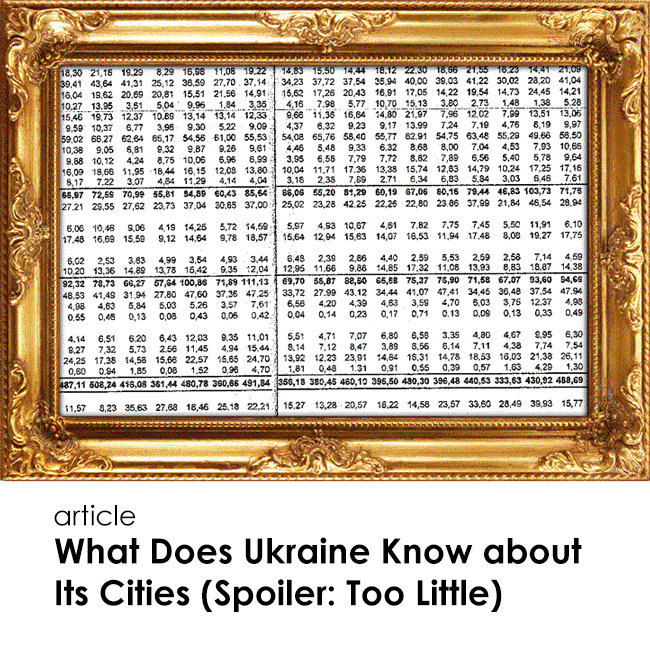 We prepared a reflective article about this experience and held a public discussion about the accessibility and quality of government statistics in Ukraine at the level of cities and communities.

The project also resulted in a series of articles about critical urban theory called the Political Economy of the City, an article about rankings, and an article about the need for a regional equalization policy.

The work was a part of the Strengthening Civil Participation in Ukrainian Cities project, supported by the Charles Stewart Mott Foundation.

Political Economy of the City: A Series of Articles on Critical Theory of Urban Development

The work was a part of the Strengthening Civil Participation in Ukrainian Cities project, supported by the Charles Stewart Mott Foundation.

Researching the Potential of Podil Residents to Unite into Urban Communities

We made a social neighborhood division and evaluated the potential for urban involvement in another Kyiv neighborhood which is currently one of the centers of urban development. 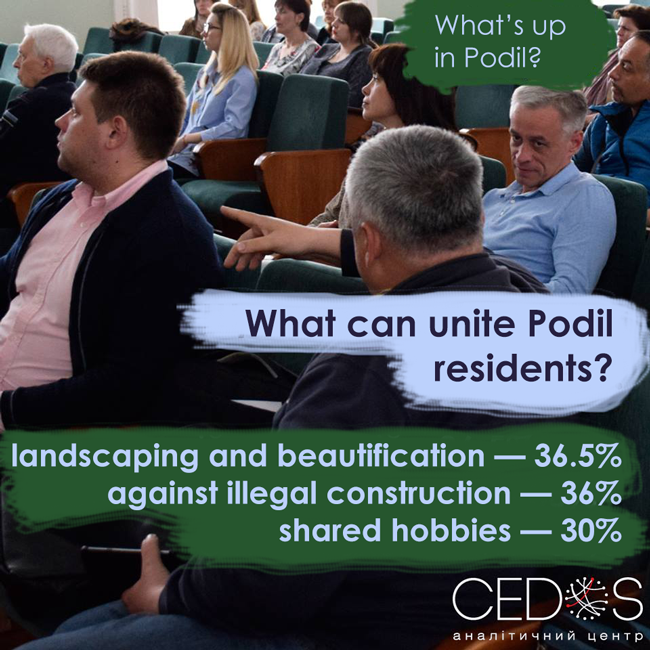 The study was carried out by the CEDOS Think Tank as a part of a project by NGO Skyscraper called Strengthening Sustainable Initiatives of the Community of Old Podil, which was supported by Pact Inc. Read the report (in Ukrainian).

Policies should be based on evidence and research. To achieve that, the government should develop effective mechanisms for funding studies whose results can be used to develop policies. We demonstrated that education policies today cannot rely on the existing mechanisms of funding educational research. 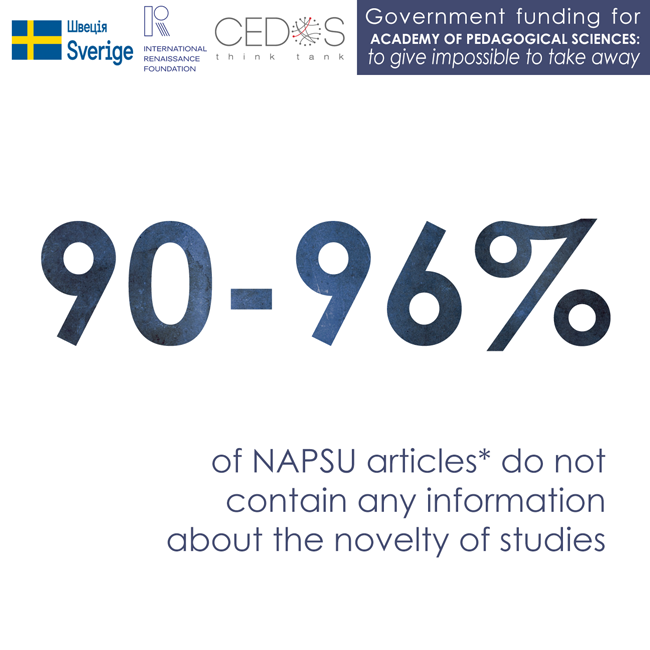 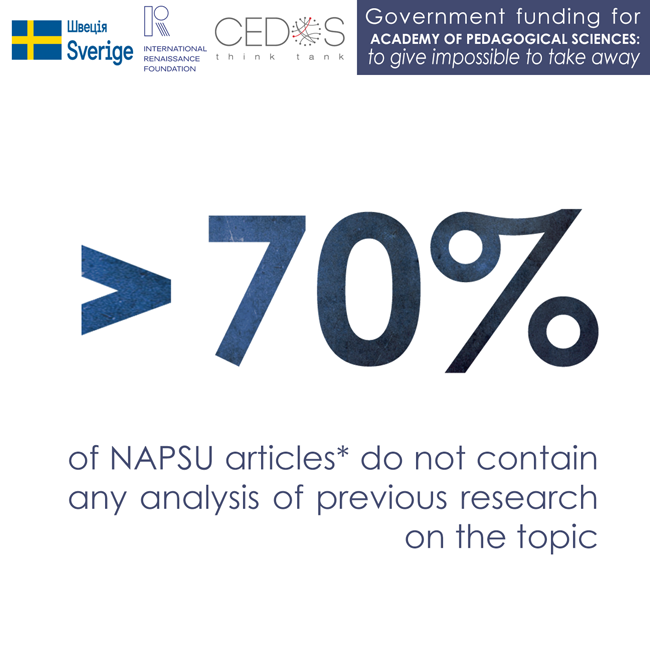 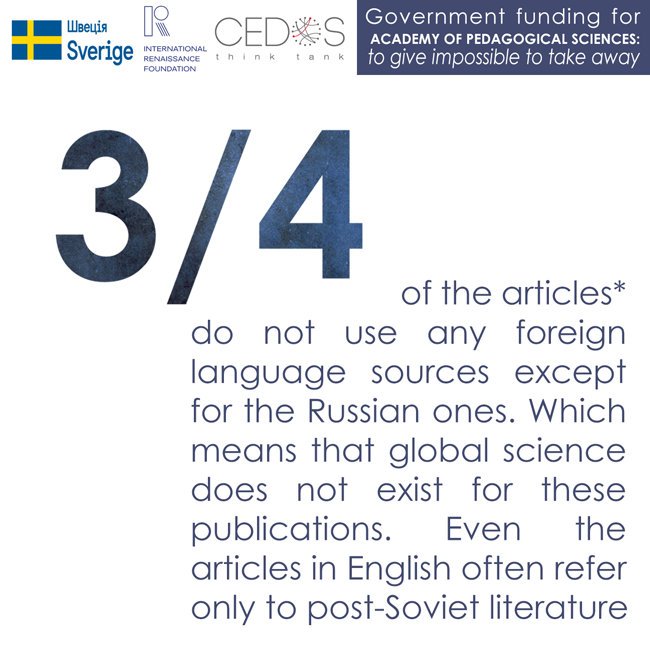 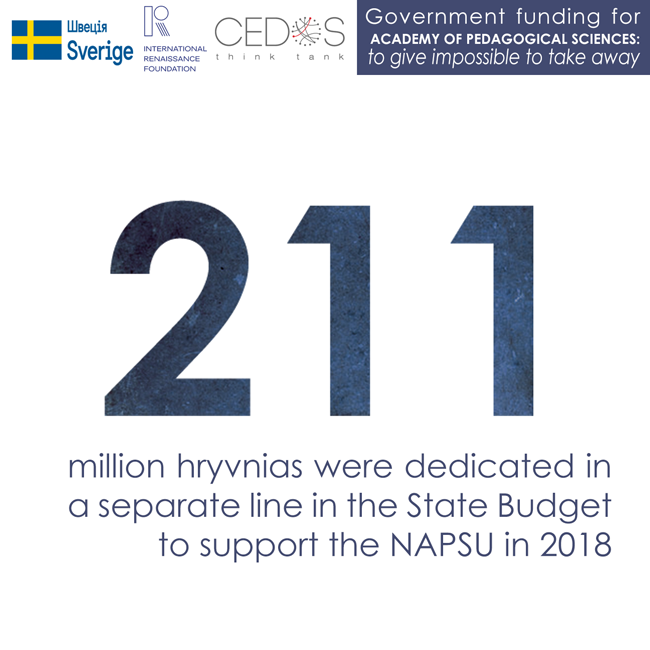 * The selection of articles that were analyzed includes all the research papers by the three institutions within the NAPSU (the Institute of Pedagogy, the Institute of Higher Education, the Institute of Special Pedagogy) in the period of 2014-16. The total number of articles was 663. See the report for more details on the methodology, these and other results of the analysis.

We have determined whether the procedures and practices of planning and organizing research activities that exist at the Academy of Pedagogical Sciences (based on the examples of several science institutions) can ensure the efficient use of the government funding for its research activities. Given our findings, there is no reason to believe that in the period of 2014-16 the NAPSU had the conditions for the efficient use of government funding. Read the report (available in English).

The study was conducted as a part of the Think Tank Development Initiative in Ukraine, implemented by the International Renaissance Foundation in partnership with the Open Society Initiative for Europe (OSIFE) with financial support from the Embassy of Sweden in Ukraine.

Index of Cultural and Creative Potential of Ukrainian Cities

Last year, we also developed the methodology for the Index of Cultural and Creative Potential of Ukrainian Cities and tested it on the available data for the five biggest cities in Ukraine. 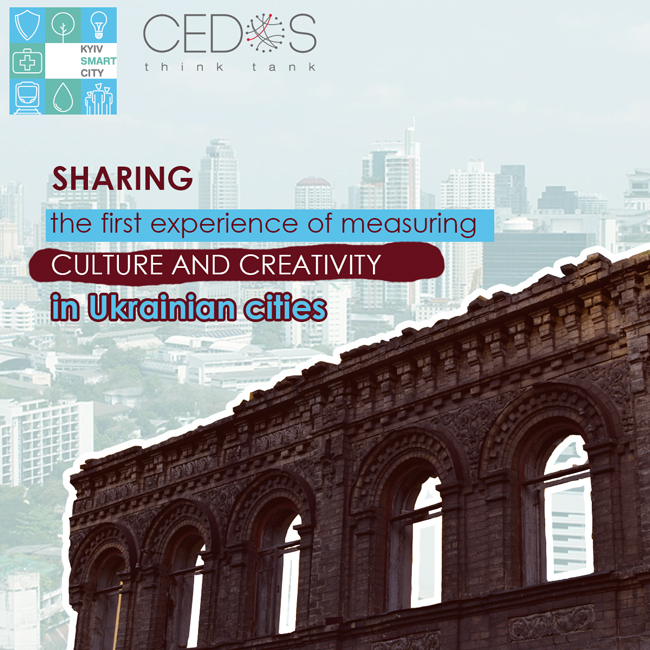 This wasn’t the first attempt to develop an index of cultural and creative potential of cities. However, as far as we know, this was the first time such an attempt was published. Moreover, we did not just publish the findings, but also the methodological challenges and limitations. We hope that it will be useful for developing further research in this field. Read the publication (in Ukrainian).

The project was commissioned by the Kyiv Smart City initiative.

The formula which we have developed based on the existing statistical indicators is founded on the principles of fairness, simplicity in administration, and transparency. It makes the distribution of government funding objective and based on the performance indicators for each institution. This increases the transparency of funding distribution compared to the existing system.

In 2016, we developed a concept for funding universities based on the results of their activities — that is, we described the idea itself. In 2017-18, we actively helped the Ministry of Education and the Ministry of Finance to implement some elements of this approach. In 2018, we already made a mathematical model for our proposal and determined its possible effect on each university.

The project was a part of the Think Tank Development Initiative in Ukraine, implemented by the International Renaissance Foundation in partnership with the Open Society Initiative for Europe (OSIFE) with financial support from the Embassy of Sweden in Ukraine.