Cedos has collected and recorded evidence of education in areas that have been temporarily occupied by Russian troops. 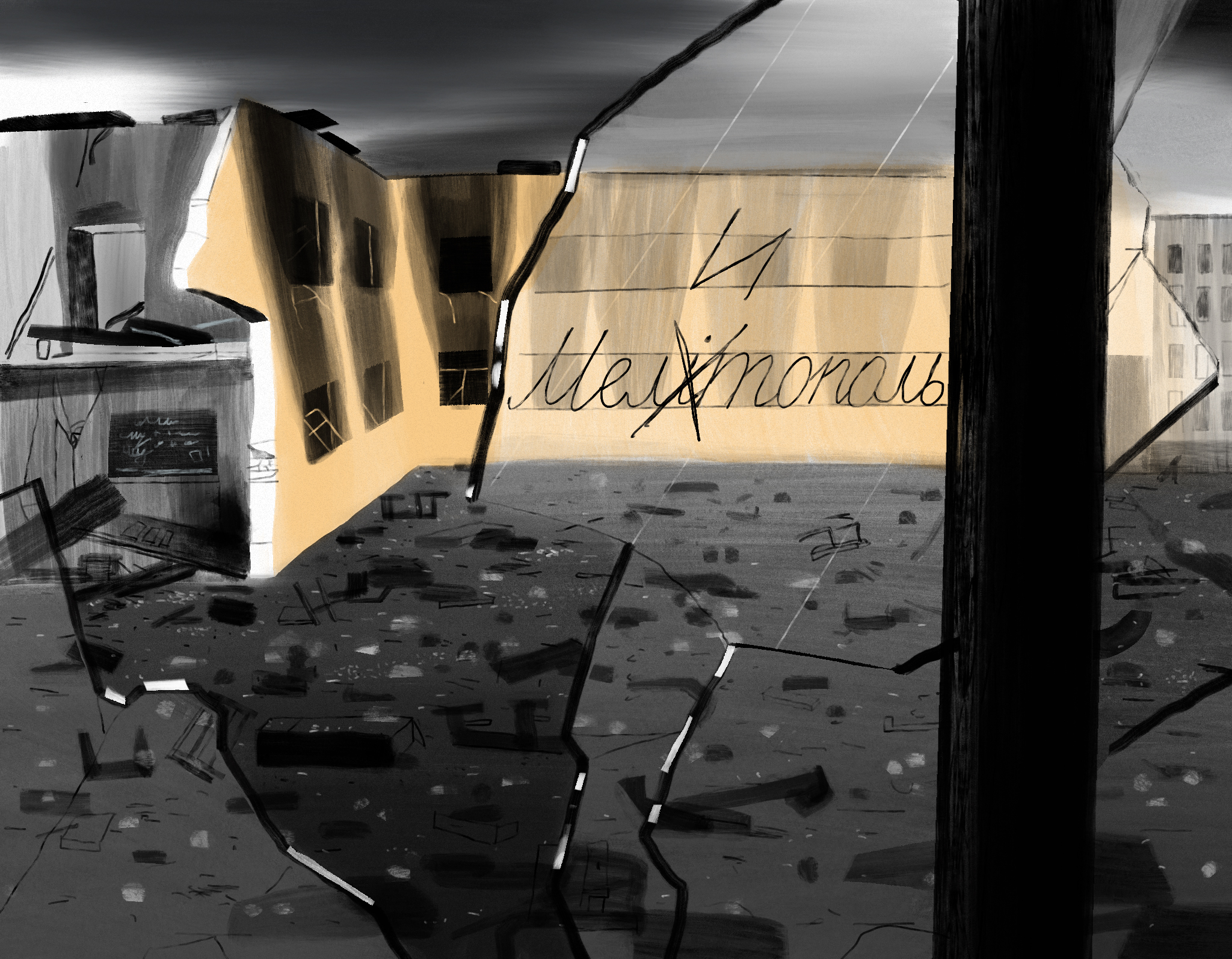 As a result of the full-scale invasion of Russian troops into the Ukrainian territory, a number of Ukrainian cities, towns and villages have been occupied (particularly in Luhansk, Donetsk, Kherson, Zaporizhia, Kyiv, Chernihiv, Sumy, and Kharkiv Regions). Some of these territories were de-occupied in early April 2022.

In this paper, we have recorded the main evidence of education in the occupied territories based on personal contacts and reports in official sources, media, and social media. The paper consists of several parts: an overview of the organization of studies and the working conditions of educators in the territories occupied as a result of Russia’s full-scale invasion in 2022; reports on the education of children deported to the Russian territory; a brief overview of the situation with education in the temporarily occupied territories of Donetsk and Luhansk Regions as well as Crimea after 2014; and photos of Ukrainian education institutions where Russian invaders made their bases.

Since Ukrainian communities were or have been under Russian occupation for different periods of time and under different conditions, the situation with education developed according to several scenarios which can either be alternatives or coexist.

Cases have been described (in Energodar, Melitopol) when the occupation authorities appoint new education administrators who contact educators and demand that they resume working; they also appoint new school headmasters.

In some cases (there are testimonies from Starobilsk, Volnovakha, Mariupol), some educators obey the demands of the occupiers and resume teaching. New subjects are introduced in these schools—Russian Language and Literature, Social Studies, History—which are taught according to Russian textbooks and in Russian. In Mariupol, the only school that resumed its work after most of the city was occupied by the Russian army began the classes with the Russian national anthem, according to Russian media.

Russian media and the media of the so-called “LPR” and “DPR” described this as a school opening ceremony, which likely involved a crowd of students, parents and educators. According to these media, military units of the so-called “LPR” and “DPR” are dislocated in these schools, supposedly to provide security for education institutions. This poses a threat to the safety of students and educators.

In addition to the forced switch to Russian curricula in the education process, there is also mandatory militarization of underage students in the occupied territories in Luhansk and Donetsk Regions. Under the guise of “national-patriotic education,” they are likely being prepared for participation in the war. Liudmyla Denisova, the Ukrainian Ombudsman, reports that the occupation administration plans to launch cadet corps and classes as a part of “supporting and developing the Cossack component in the education system,” particularly in Lysychansk and Severodonetsk.

Meanwhile, in the occupied cities, towns and villages which still have internet access and are able to study (there are no intense bombings, there is electricity), Ukrainian educators continue working remotely. For instance, in Kherson, schools work without changes, the teachers create video classes and contact their students on social media or by phone.

According to the recommendations of the Ministry of Education and Science, heads of educational institutions can independently determine when to end the academic year 2021/2022. Therefore, in some occupied territories, summer vacations start earlier to reduce the risks for teachers and children. In particular, in 4 districts of Zaporizhia region, local authorities decided to do so in early May.

A significant number of children who were not able to evacuate from hotspots or temporarily occupied areas did not study at all during the occupation. This applies to the residents of Kyiv, Sumy, Chernihiv, Donetsk and Luhansk Regions. There was no education process in these regions due to the danger it posed to the life and health of students and educators, and due to the lack of technical conditions required for studying (electricity, cell connection, internet).

As the de-occupation of towns and villages began, particularly in Kyiv Region, we started seeing photos of education institutions where Russian soldiers were present. The photos illustrate not only the ruined buildings, but also messages and inscriptions left by the occupiers on school walls for Ukrainian students. The Russian military had their command posts in some schools. For instance, one of the schools in Katiuzhanka, Kyiv Region, had a Russian command post in it.

Educators in the occupied territories are under significant pressure and threat due to their professional activities.

The official position of the Ukrainian Ministry of Education and Science (MES) is that the teachers who are not able to continue working (particularly because they are under occupation or they do not have the technical means for work) can keep their job and salaries; they are paid according to downtime rates, at least ⅔ of their salaries or more. Assurances that educators in the occupied territories will keep their salaries have been expressed, in particular, by the leadership of Zaporizhia Region.

The MES does not allow any collaboration of education workers with the occupation authorities. The position of the Minister of Education and Science and the Education Ombudsman is to view teaching according to Russian curricula as a type of collaboration for which teachers can be held accountable and punished.

At the same time, the occupation authorities put pressure on educators and school managers to resume work and switch to teaching in Russian and according to Russian standards and textbooks. There is evidence of mandatory retraining for educators who have been deported to Crimea or Russia in order to make them teach in Russian in the future. There are also testimonies of threats against educators and their families in case they refuse to collaborate.

For example, in one of the occupied communities in Zaporizhia Region, the head of the Education Department has agreed to collaborate with the occupiers and forces teachers to resume teaching starting on May 2 according to Russian curricula. Some of the educators resigned to avoid working with the occupiers. But the head of the Education Department blackmails and threatens them, saying that if they do not agree on their own, they will be “taken to the commandant’s office” (which may threaten their lives).

Deportation of children to Russia

According to the data obtained by the UN from the Russian government, as of April 20, 563,266 Ukrainian citizens had been displaced to Russia. About 121,000 of them are children. Most of these people were displaced by force, i.e. deported from the occupied territories of Ukraine. Many people, possibly children among them, are currently in filtration camps organized by the occupiers. For example, according to an advisor to the mayor of Mariupol, as of April 18, at least 20,000 people were detained along the Manhush-Nikolske-Yalta route.

Russia intends to introduce forced teaching of Russian for the deported people. Lilia Humerova, the head of the science, education and culture committee of the Federation Council of Russia, said that it was a problem that the deported Ukrainian children do not speak Russian “at a sufficient level,” which will prevent them from mastering the Russian education curriculum. According to her, there is a plan to organize summer language courses for these children. There was no mention of whether attendance of these courses would be voluntary.

There are also reports of plans to adopt Ukrainian children who have been illegally deported. For this purpose, Russia intends to simplify the adoption procedure and sign agreements with the so-called “LPR” and “DPR” which would allow the transfer of orphaned children from these territories directly into Russian families. According to the Ukrainian law, any adoptions by foreign citizens can only take place with approval of Ukrainian official bodies. The Ukrainian Ministry of Foreign Affairs believes that such actions can be categorized as kidnapping.

Context: situation in the territories of Donetsk and Luhansk Regions and Crimea which have been occupied since 2014

With the Russian occupation of parts of Donetsk and Luhansk Regions as well as the Autonomous Republic of Crimea and Sevastopol, the education system in these regions was changed.

In the occupied territory of Donetsk Region, school subjects were taught according to Ukrainian curricula until the end of 2014. In 2015, education institutions had to switch to new curricula and textbooks. Teaching was almost completely switched to Russian. According to a study by the UHHRU titled The field of education in the temporarily occupied territories, the teaching of the Ukrainian language and literature in the temporarily occupied territory was reduced to the minimum, although it formally existed in the school curricula. History of Ukraine was replaced with History of Homeland, based on the history of the Russian empire and the history of Donbas. 9,270 (Donetsk Region) and 5,105 (Luhansk Region) people graduated from high school in 2021.

Certain universities continue operating in the occupied territories of Donetsk and Luhansk Regions, but their degrees are not recognized anywhere in the world, which is why some candidates enroll in Russian universities. In 2021, the Security Service of Ukraine reported that Russia started recognizing degrees obtained in the so-called “DPR.”

In the occupied Crimea, the education system was supposed to switch to Russian standards already in 2014. Ukrainian Literature and History of Ukraine were also removed from the curriculum. In addition, the education system switched from the 12-grade system of evaluation to the 5-grade system. Ukrainian textbooks were removed from use and Russian textbooks were introduced instead. History of Ukraine was replaced in the occupied peninsula with History of Russia taught according to the unified textbooks approved in Russia. 10,500 people graduated from high school in Crimea in 2021.

Higher education was also transformed in Crimea. In particular, the Vernadsky Federal University of Crimea was established in Simferopol in 2014 by merging 7 universities and 7 research institutions; the same year, the Sevastopol State University was also established by merging 7 universities. The curricula switched to Russian standards, and the graduates started receiving diplomas according to Russian state regulations.

Annex. Photos of schools in territories liberated from occupation

Social, temporary and crisis housing: What Ukraine had when it faced the full-scale war