Access to housing is critical in wartime because having a home can save one’s life. We are working to monitor the impact of war on the issues of housing and access to housing in Ukraine. We aim to record the most important decisions and events in this field, outline the key challenges, and form a foundation for housing policies in the future. 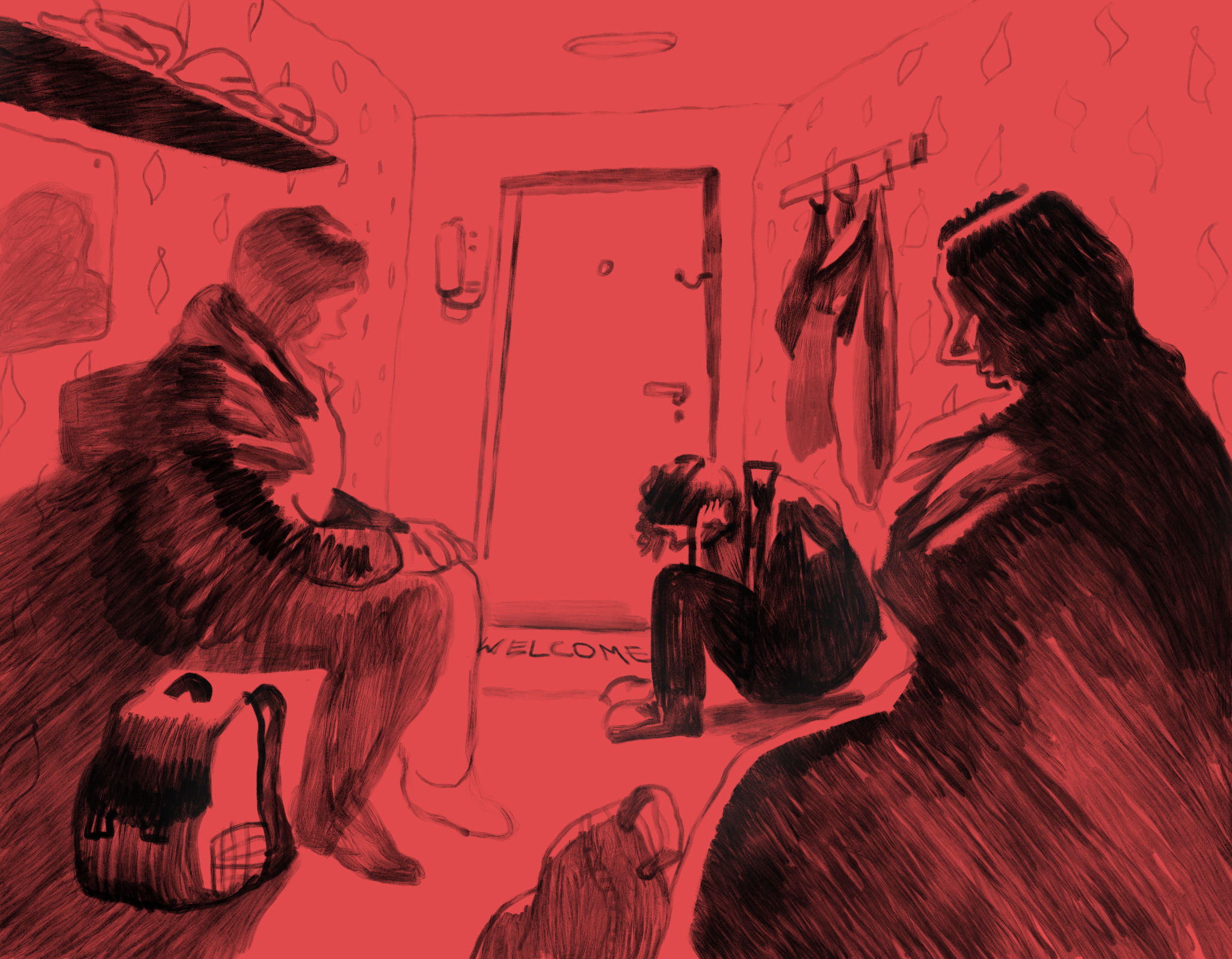 Since the beginning of the full-scale war in Ukraine, immense numbers of people have been forced to leave their homes. As of March 18, 6.5 million people have been displaced within the country. About 4 million of them are staying in the western regions of Ukraine. A lot of housing units have been destroyed: according to the State emergency service of Ukraine, as of March 22, the Russian military has destroyed damaged at least 3780 residential buildings and completely destroyed 651. There are reports of illegal evictions from rental housing and of rent hikes. Access to housing is still one of the most urgent problems which central and local government bodies as well as volunteers in all regions of the country are trying to solve.

Housing policy is one of the strategic topics which Cedos has been working on for four years now. Housing is every person’s basic right. Access to it is critical in wartime, because having a home can save one’s life. We are working to monitor the impact of war on the issues of housing and access to housing in Ukraine. This work aims to record the most important decisions and events in this field, outline the key challenges, and form a foundation for housing policies in the future.

For the purposes of the monitoring, we use the official pages of central and local government bodies, reports in Ukrainian and international media, statements and publications by government representatives, social media posts.

In this paper, we focus on the decisions made by national and local government bodies in terms of accommodation for displaced people and regulation of rental housing; we also give examples of problems faced by tenants during the war.

On March 11, 2022, the Cabinet of Ministers issued a decree on the compensation of utility fees to the budgets of communities that host displaced people free of charge. According to the decree, the compensation of utility fees can be received by communities that provide free-of-charge accommodation to displaced people in community-owned buildings (such as sanitariums, schools and kindergartens). This refers to the spending on heating, water supply, sanitation, gas supply, power supply, purchase of wood, pellets and coal.

According to the decree, communities should file applications with the military administration, attaching the bills or scanned documents that confirm the payment for utilities, and then they will receive the compensation. The funds will be managed by the Ministry for the Development of Communities and Territories (hereafter referred to as “the Minregion”), which is going to prepare a government act on the provision of funding. Communities will have the opportunity to apply from early April 2022, and compensation will be provided for the utility fees charged from March 1, 2022.

On March 18, the Minregion launched a survey form for people willing to provide housing to internally displaced people.

On March 20, the ministry announced a support program for people hosting the displaced. Housing owners will be compensated for utility fees in the amount of 450 UAH per each hosted person per month. The payments will be funded from the budget through local self-government bodies. The Minregion encourages people to report their willingness to host the displaced to their local governments in order to form a register of the available housing fund. According to the ministry, this can be done through the website Prykhystok, and the corresponding function will also be added to the Diya app soon.

On March 12, Lev Partskhaladze, the Head of the Confederation of Construction Workers of Ukraine, reported the launch of a register of housing available for buyout for the purpose of hosting the evacuated population. According to him, the initiative has been supported by the Minregion and means that the housing units will be bought out using funds from the budget. The mechanisms for funding this program are unknown yet. Given the possible reduction of tax revenue to the state budget and the increasing need for military and humanitarian spending, it is important to consider first of all the option of free provision of vacant properties in new buildings for temporary accommodation. This option is provided, in particular, by the Law of Ukraine “On the legal regime of martial law” (Article 8, Paragraph 17), which establishes a war accommodation duty, meaning the temporary provision of housing for the accommodation of both the evacuated population and the military.

The Center for Strategic Communication and Information Security under the Ministry of Culture and Information Policies has created a manual for communities on how to prepare residential premises for the displaced. The basic conditions for arranging such housing are: heating, access to water and bathrooms, the means to cook hot food, access to communication. The manual notes that the premises must be “vacant in actual fact, not just on paper.” It also suggests avoiding conflict, preventing price hikes, and engaging volunteers and local businesses to help displaced people.

Local self-government bodies mostly focus on providing the displaced with short-term crisis housing. Accommodation is arranged both in residential units and on non-residential premises (schools, kindergartens, gyms, culture institutions). Information about such accommodation is spread and updated by local self-government bodies through their official communication channels. Humanitarian headquarters have been opened to coordinate the placement of the displaced and direct them to the available accommodations (Zakarpattia). In addition, dedicated places have been arranged where the displaced people who arrive during curfew can spend the night (Ivano-Frankivsk).

Some of these shelters or places in them are used for one or several nights during transit to other Ukrainian regions or abroad. Other shelters have been hosting the same people for a few weeks already, so the need to look for more long-term solutions has emerged. The options proposed by now include installing module houses and equipping dormitories for temporary residence using help from entrepreneurs. The conditions and characteristics of residence and meeting the needs of displaced people at such places of residence require additional consideration.

On March 7, the Mayor of Lviv Andriy Sadovyi stated that the city was at the limit of its capacity for receiving the displaced. In the past week (March 14—20), official channels of local government bodies and their representatives have started sharing the information about the launch of additional locations for accommodating the displaced. For instance, Volyn will launch additional 13,000 places, another 15,000 places will be launched in Zakarpattia; dormitories will be renovated in Ivano-Frankivsk. Maksym Kozytsky, the Head of the Lviv Regional Military Administration, stated on March 17 that the stock of available beds in the region allows it to host additional 17,000 displaced people and appealed to heads of enterprises with a request to help equip the additional places. Vadym Tabakera, the Deputy Director of the Department of Economic Policy at the Lviv Regional Military Administration, has also reported that the region is launching a mechanism for funding the renovation of facilities that can be used to accommodate displaced people using public funds and donations.

One of the problems faced by the displaced is the rising rent prices. In Lviv, rents have increased by 72%, in Uzhgorod by 46%, in Ivano-Frankivsk, Khmelnytsky and Lutsk by 10–15%, in Chernivtsi by 80%. These data are reported by Forbes, which cites the League of Ukrainian Experts. They compare the rent prices in early March to the prices of January 2022.

The increase of rental prices makes access to housing more difficult for people who do not have enough financial resources or have lost their stable income source due to the war. This can be an obstacle not only for people who have been forced to move, but also for those who have not changed their place of residence and currently live in rental housing.

The problem of rising rent prices in the regions which have received the highest numbers of people has attracted the attention of government representatives who condemn it. In particular, the mayors of Chernivtsi, Lviv, Lutsk, Rivne, Ivano-Frankivsk, as well as the Deputy Head of the Zakarpattia Regional Military Administration have urged landlords not to raise rents. In Lviv and in Zakarpattia, government bodies have set up hotlines for reporting such cases.

One of the options could be the government regulation of housing rent prices. For the first time, rent regulations were introduced in the territory of modern Ukraine, as well as in other European countries, after World War I. Later, governments gradually lifted these restrictions only to introduce them again to combat the housing crisis after World War II. Today, the housing rent control mechanism remains popular and is used in many European countries, albeit in different ways.

On March 16, Andriy Sadovyi also reported that he has filed a proposal with the regional military administration to use the housing owned by individuals and legal entities who are raising rents in order to accommodate the military or the displaced free of charge. On March 17, a similar statement was made by the Mayor of Khmelnytsky Oleksandr Symchyshyn. He said that properties can be confiscated “in favor of the state” if rent prices are raised. As we noted above, the Law of Ukraine “On the legal regime of martial law” establishes a war accommodation duty, meaning the temporary provision of housing, particularly for the accommodation of the evacuated population.

As of March 22, no reports of property confiscation have been recorded.

In late February, there were at least several reports on social media about attempts to illegally evict tenants from their homes. Unfortunately, at the moment it is impossible to collect all these stories, to verify them, or to assess the scale of the problem. One of the reasons for eviction can be the landlords’ need to use the rental housing for their own accommodation (the overwhelming majority of rental housing in Ukraine belongs to individual landlords).

However, according to Article 47 of the Constitution of Ukraine, these evictions are illegal: “Nobody can be deprived of housing by force, other than on legal grounds and by a court decision.” An additional solution for this problem can be to impose a ban on evictions from rental housing across the entire Ukrainian territory while martial law is active. Such bans are an effective mechanism of housing policy regulation. During the COVID-19 pandemic, bans on tenant evictions were introduced by governments in the US, Germany, Canada, Spain, Argentina and other countries.

The field of rental housing has become a space for expressing social solidarity and mutual aid during the war. Thousands of people offer to host the displaced, together with their children and pets, at their homes for free. Dedicated websites, chatbots and forms have been set up to search for and offer accommodation for the displaced both within Ukraine and abroad, such as Prykhystok, SafeHomeUA, Ukraine Take Shelter, Joint Action Center.

37 theses about the current state, challenges and principles of new housing policy in Ukraine

‘Re.Housing for Ukraine’: we are launching an analytical and discussion initiative to find solutions
news